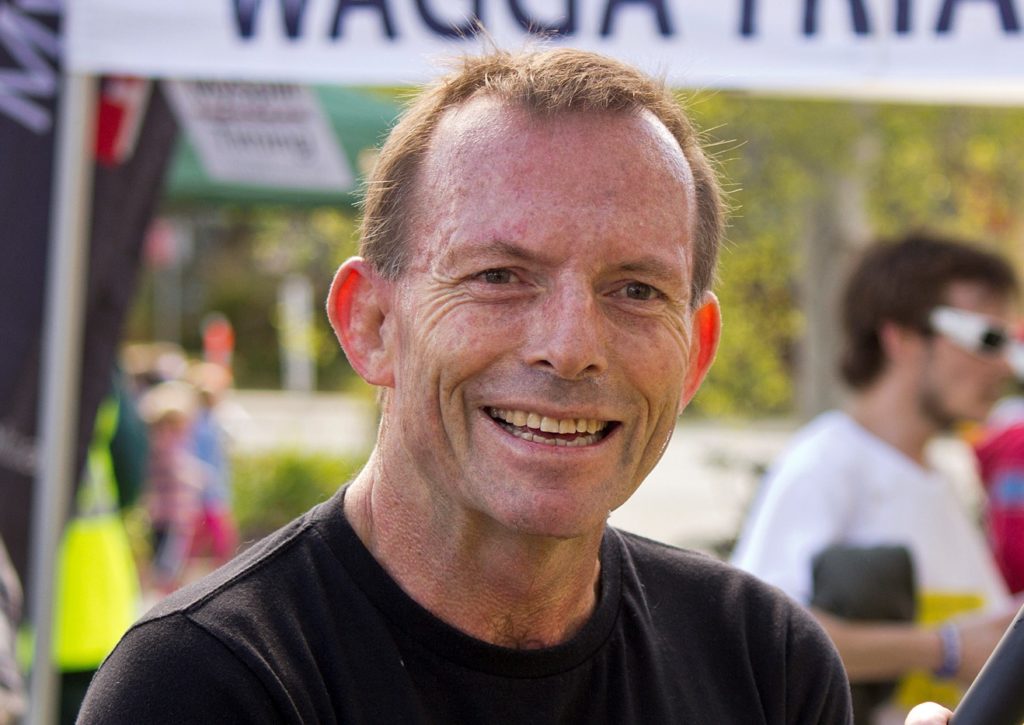 Tony Abbott was Prime Minister of Australia between 2013 and 2015, having led the centre-right Liberal Party in opposition since 2009. He was ousted as Liberal Party leader by Malcolm Turnbull in September 2015 following poor approval ratings. [1], [3]

Other political roles he has held include Minister for Women, Leader of the House and Minister for Employment and Workplace Relations. Abbott lost his parliamentary seat in the 2019 elections to an independent candidate who “campaigned strongly on a platform of climate change”, according to the Sydney Morning Herald. [1], [4]

Abbott has historically opposed measures to combat climate change, advocating for the (ultimately successful) repeal of Australia’s carbon tax in 2014, introduced by the previous Labor government. In 2009, Abbott resigned from the shadow cabinet of Malcolm Turnbull, in protest at Turnbull’s support for the government’s proposed emissions trading scheme. The resignation of Abbott and a number of other shadow ministers led to a leadership contest that Abbott won by a single vote. [5], [6]

In 2017, he gave a lecture entitled “Daring to Doubt” to the UK-based climate science denial group the Global Warming Policy Foundation, following in the footsteps of fellow Australian PM John Howard. [7]

Abbott has close ties to the influential right-wing thinktank, the Institute of Public Affairs, which has regularly invited him to give speeches. In 2013, the group published a series of policy recommendations to abolish climate measures, several of which were adopted by Abbott’s government in September of that year. [8], [9]

Abbott began his career as a journalist for The Bulletin and The Australian, as well as briefly managing a concrete factory. He later became press secretary and political adviser to Liberal Party opposition leader John Hewson. [10]

Immediately before being elected as an MP for Warringah in 1994, Abbott worked as the first Executive Secretary of the Australians for Constitutional Monarchy group, which works to “preserve, protect and defend the Australian Constitution, the role of the Crown in it, and our National Flag”. [11]

In September 2020, Abbott was appointed to the Government’s “Board of Trade,” advising Secretary of State Liz Truss on the negotiation of new agreements with countries such as Australia. [21]

During a panel event at the Conservative Political Action Conference (CPAC) in Sydney, Abbott said:

In a 2017 lecture Abbott gave to the Global Warming Policy Foundation, he said: [7]

“Even if reducing emissions really is necessary to save the planet, our effort, however Herculean, is barely-better-than-futile; because Australia’s total annual emissions are exceeded by just the annual increase in China’s.”

“There’s the evidence that higher concentrations of carbon dioxide – which is a plant food after all – are actually greening the planet and helping to lift agricultural yields. In most countries, far more people die in cold snaps than in heatwaves, so a gradual lift in global temperatures, especially if it’s accompanied by more prosperity and more capacity to adapt to change, might even be beneficial.”

At another point in his speech he said:

“Contrary to the breathless assertions that climate change is behind every weather event, in Australia the floods are not bigger, the bushfires are not worse, the droughts are not deeper or longer, and the cyclones are not more severe than they were in the 1800s. Sometimes, they do more damage but that’s because there’s more to destroy, not because their intensity has increased.” [7]

When asked about his views on climate change during an appearance on ABC‘s Insiders show, Abbott said: [12]

“I think that climate change is real, humanity makes a contribution. It’s important to take strong and effective action against it, and that is what our direct action policy does.”

“The important thing is to take strong and effective action to tackle climate change, action that doesn’t damage our economy. And that is why the incentive-based system that we’ve got, the direct action policies, which are quite similar to those that president Obama has put into practice, is – that’s the smart way to deal with this, a big tax is a dumb way to deal with it.” [12]

Speaking to Institute of Economic Affairs (IEA) Director-General, Mark Littlewood at a virtual event held by the thinktank on the “future of UK trade,” Abbott said:

“So look, this idea that Australians practice cruelty to animals is absolutely nonsensical and while our rules might still differ in some small respect from Britain’s, our standards would be in all meaningful respects, just as high…

Abbott appeared on an Israel Public Broadcasting Corporation radio show in which he said: [13]

“While we still seem to be in the grip of a climate cult, the climate cult is going to produce policy outcomes that will cause people to wake up to themselves.”

He also said during the interview:

“The last thing we should do is drive our industries offshore and be putting pressure on household budgets and risk third world-style blackouts all in the name of climate change. We have got to be sensible and balanced and proportionate about these things and I don’t think other policymakers are right now.” [13]

In a speech to the climate science denial group the Australian Environment Foundation, Abbott called for Australia to withdraw from the Paris Agreement and incorrectly said: [14]

“Storms are not more severe; droughts are not more prolonged; floods are not greater; and fires are not more intense than a century ago – despite hyperventilating reportage and over-the-top claims from Green politicians.

“Sea levels have hardly risen and temperatures are still below those of the medieval warm period. Over time, temperature change seems to correlate rather more with sun spot activity than with carbon dioxide levels.

“And even if carbon dioxide, a naturally occurring trace gas that’s necessary for life, really is the main climate change villain, Australia’s contribution to mankind’s emissions is scarcely more than 1%.” [14]

The AEF was established by the right-wing Institute of Public Affairs thinktank in 2005 and has campaigned against carbon pricing and wind energy. [15]

Abbott was appointed to the Government’s “Board of Trade,” advising Secretary of State Liz Truss on the negotiation of new agreements with countries such as Australia. His appointment came despite widespread concern over his record on women’s and LGBT+ rights and climate science denial. [21]

Abbott gave a speech to the Institute of Policy Affairs in which he “called on the Coalition to focus intently on cost of living pressures and renewed his attack on the renewable energy target, blaming it for making gas and coal unaffordable”, according to a report by ABC. He also rejected a proposed clean energy target and said a new coal-fired power station should be built as soon as possible, with government funding if necessary. [8]

Abbott called for Australia’s renewable energy target to be scrapped in a speech to a Young Liberals conference, claiming it would destroy heavy industry in South Australia due to rising electricity costs, ABC reported. The policy was defended by the Energy Minister as “moderate” compared to a Labor Party proposal. [16]

Abbott appeared on radio host Alan Jones‘ show during which he said he thought wind farms were “visually awful” and could have “potential health impacts”. [18]

After defeating Liberal Party leader Malcolm Turnbull in a leadership contest, Abbott conducted a secret ballot among Liberal MPs and Senators on the government’s proposed emissions trading scheme. The party voted overwhelmingly against, “guaranteeing the death of the Rudd Government’s ETS,” ABC reported. [19]

DeSmog revealed that Abbott had surrounded himself with a number of advisers who reject mainstream climate science. They included Maurice Newman, who has described climate change as a “smokescreen” for “vested interests” and Nick Minchin, who played a key role in helping Abbott oust Malcolm Turnbull in 2009. [20]